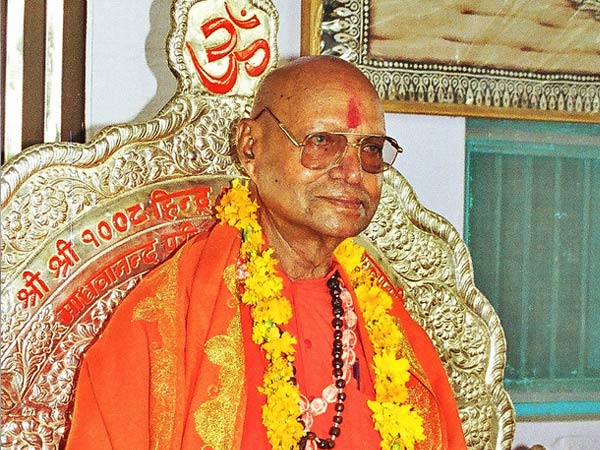 His meditation and prayer meant spiritual help for the whole world. Holy Guruji attained the blessed state of God Realisation through pure devotion and service to his Master. Setting an example through his life of pure devotion to God and of service to all creatures, he was an inspiration to all seekers of the Truth. "Enter the kingdom of the Lord through the gate of sacrifice" is his encouragement to all seekers of God, for union with God is attained only when there is complete and unconditional surrender of body, mind, and soul.

His Holiness was born on 11 September 1923 and received Sannyas initiation in the year 1942. He lived at Sri Mahaprabhuji's side for more than 20 years, faithfully recording Mahaprabhuji's Bhajans and Satsangs throughout that time.

Paramhans Swami Madhavanandaji travelled extensively throughout India and the world, tirelessly spreading the message of Sat Sanatan Dharma and Yoga according to the teachings of his Master Bhagwan Sri Deep Narayan Mahaprabhuji. He called for universal brotherhood and service to mankind without prejudice or discrimination of nationality, status, or religion. Through his exemplary life of pious devotion to Gurudeva and selfless service to all living beings, Holy Guruji inspired everyone who came in touch with him.

As an accomplished singer, he often expressed these teachings in the form of bhajans. Holy Guruji wrote hundreds of bhajans and authored books in Hindi and Gujarati. In the book "Lila-Amrit," he has written down the story of Sri Devpuriji's and Sri Mahaprabhuji's miraculous lives. He established several ashrams in Rajasthan and Gujarat that are centers of learning and spiritual pilgrimage for devotees from the whole world. In 1998 Paramhans Swami Madhavananda was awarded the title Dharma Chakravarti in Haridwar by the World Development Parliament, and in 2001 decorated with the spiritual title of Hindu Dharmsamrat by the Kashi Vidvat Samaj (assembly of professors and scholars of the Sanskrit University of Benares) in the presence of His Holiness Jagadguru Sumeru Peethadesh Sri Shankaracharya, at the occasion of the Maha Kumbha Mela in Prayagraj (Allahabad).

Holy Guruji, as he was affectionally called by his disciples, entered into Mahasamadhi on October 31st in 2003. Still he remains a true inspiration for all seekers of the Truth.